Now that the draft dust has settled and rookies are beginning their mini camps, we finally have our first true glimpse at ADP for best ball and redraft leagues.  The charts below were first logged in early April and show the movement through the draft into early May, using MyFantasyLeague’s best ball ADP, now known as BB10s.  You can see the movement for the Top 100 players during this period in the first chart below.  The next chart shows players 101-200, just without the change in ADP yet.  I’ll be updating these charts in early June so we’ll be able to see the Top 200 change in ADP. 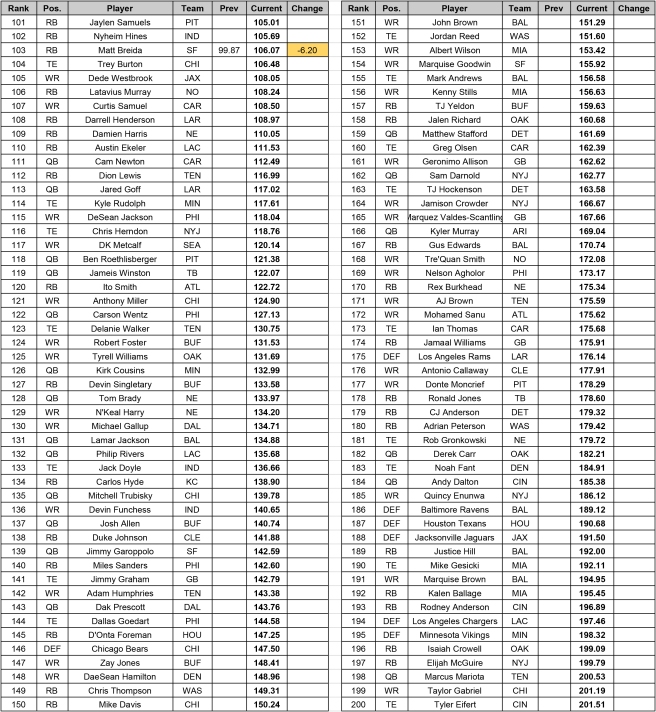 The charts below feature the Top Risers and Fallers in ADP from early April to early June.  I set the cutoff at +1 and -1, so any player with a change of greater than 1 spot or less than 1 spot can be seen below.  Middle round Tight Ends are on the move up in Jared Cook, Austin Hooper and Evan Engram.  Teams that are missing out on Kelce/Ertz/Kittle are making sure they secure a solid TE1 so I would expect the second tier of TEs to continue to Rise.  Tampa Bay WR Chris Godwin is the early favorite for breakout WR candidate this year and will likely push himself up even higher once training camps pick up this summer.  The departures of DeSean Jackson and Adam Humphries have left a massive amount of targets open in the Tampa Bay passing game, and HC Bruce Arians has already said that he believes Godwin can catch 100+ balls this year.  RBs Mark Ingram, Josh Jacobs and Marlon Mack are the top three risers at the position and will likely continue rising into that 3/4th round range.  Looking at the Fallers list, Doug Baldwin was recently released by the Seahawks and will most likely have to retire after failing a physical.  The Tyreek Hill situation remains extremely murky and is best left off of your draft boards until further notice.  We have two 49ers RBs in the top four of this list in Jerick McKinnon and Matt Breida.  This directly correlates with the signing of Tevin Coleman, who should be landing on the Riser board by June.  As for Quarterbacks, it’s interesting to note that the only QB with a positive ADP change in the top 100 was Baker Mayfield.  It’s very early in the 2019 Calendar for these teams, but getting a good grasp of who’s rising and falling early will help you stay ahead of the curve.

The charts below show the same information as above but are now broken down by position.  I noted that Baker Mayfield is the only QB to have a positive ADP change from the top 100.  I’ll be interested in seeing the data in early June to note which other QBs are on the way up.  We likely won’t see much movement from the top three TEs this summer but will have to keep our eye on the rest of the top 10 TEs.  This group will most likely have the biggest change of ADP throughout the summer. 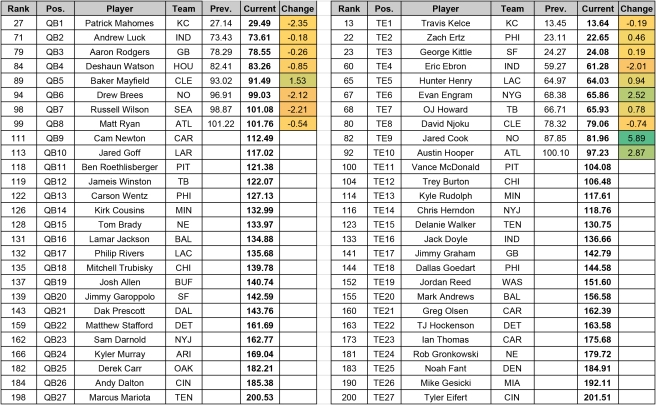 An interesting note on the top 12 RBs and top 12 WRs so far is that only David Johnson and Odell Beckham Jr have a change of ADP greater than one spot.  We shouldn’t expect to see much change in the top 10/15 players at these positions any time soon unless injuries or other news comes up.  The lower we go on these lists though is where we’ll want to pay the most attention. 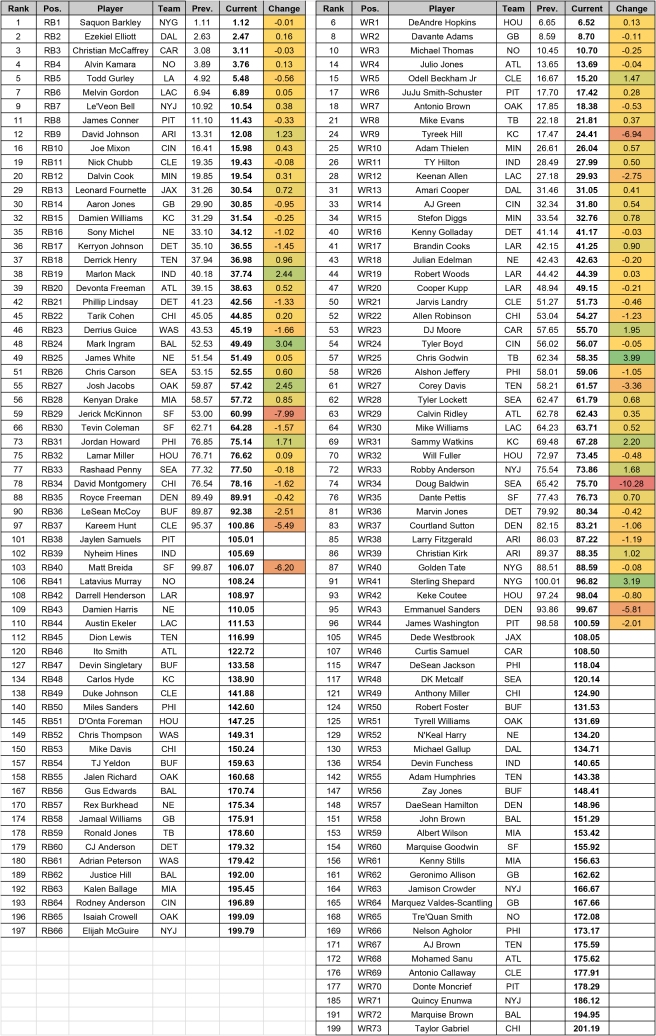 I prefer using the ADP data from BB10s because these are leagues where people are paying to make these picks.  The money’s on the line so I feel like the data collected here means a little more than your typical mock draft website.  I do love mock draft sites like FFCalculator and DraftWizard though.  I like to try different ideas and strategies out with these sites and find the FFCalc ADP to be pretty accurate as well.  I’ll be logging the ADP from FFCalc thoughout the summer and will post my findings sometime in August before the fantasy draft season really begins.

I hope you enjoyed this article!  Feel free to ask me questions and follow me on Twitter @theFellowKGB