The data below shows the number of targets to each position by team, helping us see which teams are better at targeting specific positions.

You can check out my 2020 Projected Target Share by Player here.

It should be no secret that some of the top teams in targeting TEs produce TE1s, just like the RB and WR positions.

The chart above shows the number of targets each team threw to TEs and also a percentage of their passing targets to the position.  It would probably be a good idea to pick a TE from a team that is higher on this list, guys like Zach Ertz, Dallas Goedert, Mark Andrews, Darren Waller,  Tyler Higbee, Gerald Everett,  Travis Kelce, Jack Doyle, Evan Engram, George Kittle, Blake Jarwin, Jared Cook and Hayden Hurst.

Most of these players are the top TE in their offense, but players like Everett and Goedert should both have chances to put up numbers this year, especially if the Rams commit to more 2TE sets.  And if anything were to happen to Higbee or Ertz, we would be ranking both Everett and Goedert as fringe top 5 TEs for the week.  Both guys can be drafted as your TE2 and present league winning upside.  Also, don’t sleep on Jack Doyle.

Just because a team is not towards the top of the list, does not mean that we shouldn’t be looking at their TEs.  Some teams like the Jets, Browns, Jaguars and Redskins all faced injuries last year and relied more on the RBs and WRs.  Some teams had mediocre talent at the TE position like the Patriots, Bears and Cardinals.  I’m still not sure I’d like to draft any of the TEs from these teams, but guys I’m interested in would be Chris Herndon, Austin Hooper and Tyler Eifert.  The Jets, Browns and Jaguars should all see an uptick in TE targets for 2020.

If you glance at the bar graph below, it will show the Percent of Total Targets by Team to the TE position.  The biggest move up comes from the Tennessee Titans who have a low volume passing attack, but targeted the TEs the 8th most in 2019.  With Delanie Walker currently a FA, Jonnu Smith has tremendous upside as a TE1 sleeper in 2020.

A few teams just outside of the top 10 stick out as having potential TE1 sleepers on their team.  This would be Detroit with TJ Hockenson, Denver with Noah Fant, and Dallas with Blake Jarwin.  None of these three TEs are being drafted in the top 10 of TEs, but all three have a chance to crash the party and finish as TE1s.  If you’ve watched or listened to any of my YouTube videos and Podcasts, you’ll know I’m buying Blake Jarwin as a TE1 this season.  Jarwin signed a 4yr, 24.25 million dollar deal this offseason and Jason Witten vacates 83 targets, as well as Randall Cobb with 83 targets up for grabs.  The narrative is that CeeDee Lamb will clog things up as far as targets, but there should be more than enough to go around for Jarwin and their 3 stud WRs. 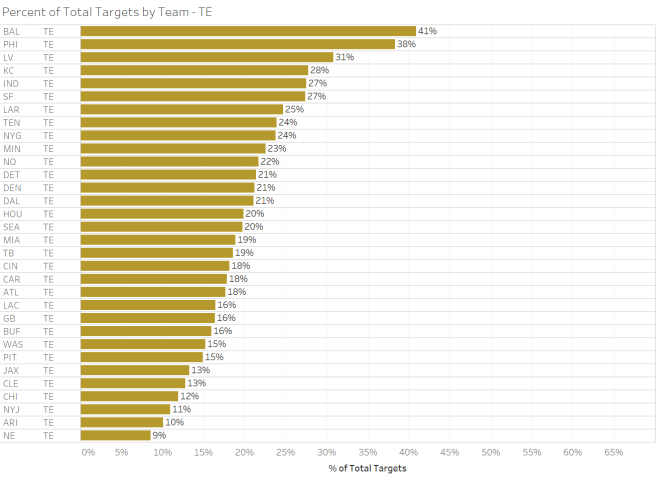 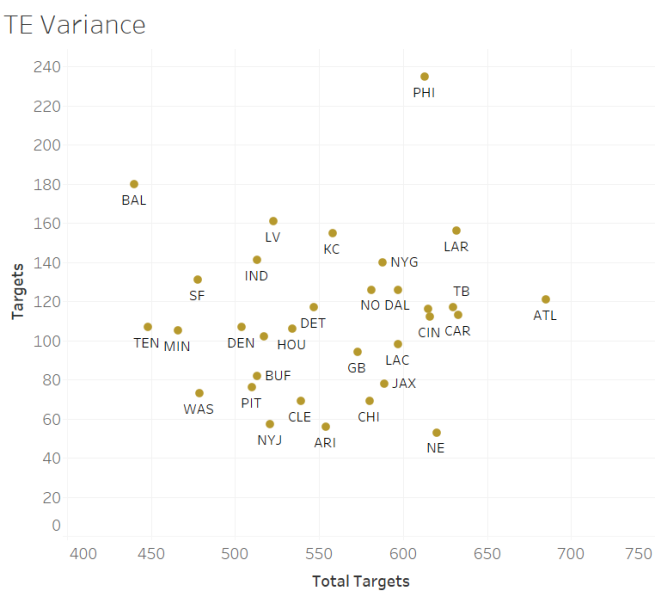 One team that gets lost within these numbers would be the Carolina Panthers.  They threw 113 targets to TEs in 2019 and have guys like CMC, DJ Moore, Curtis Samuel and now Robby Anderson to feed, so of course the % to TEs will be low.  But with the Panthers acquiring Teddy Bridgewater and set up to have a below average defense again, we should expect the 2020 Panthers to have plenty of passing volume.  Greg Olsen is in Seattle, leaving 3rd year Ian Thomas to get the bulk of those 113 targets.  Thomas can provide some great value as your TE2 on draft day with TE1 upside.  Again, he’s in a pass heavy offense and has no competition behind him.

To recap, this final chart below shows the RB, WR & TE positions by target %. 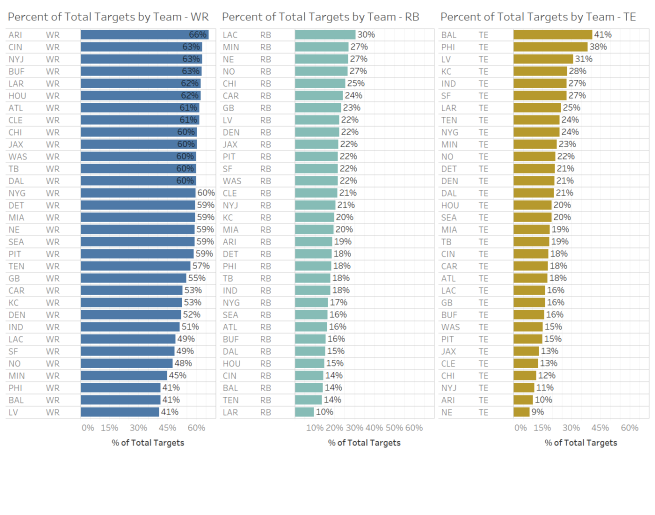 You can check out my current PPR Rankings for TEs here.